Eye Anatomy and How the Eye Works

While the eye is an extremely complex organ, it functions optically much like a camera system. For the sake of discussing common eye diseases, the following pictures can be referred to. 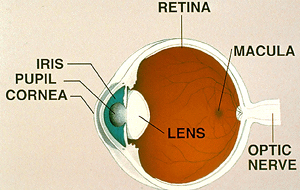 Schematic drawing of the eye

BASIC ANATOMY OF THE EYE

HOW DOES THE EYE WORK?

The eye is our most important organ for finding out about the world around us! Sight is considered our most precious sense, and people fear blindness more than any other disability. The human eye measures only about 1 inch in diameter, and yet it can see stars billions of light years away or tiny grains of sand. It can adjust its focus between a distant point and a near one.

The eye is extremely delicate, and like other organ systems in the body, it operates under very narrow physiologic parameters where temperature, blood flow, and other factors are delicately balanced. The eyeball is only one part a complex visual system which is composed of the eye and surrounding structures, the brain, and all the connecting nerve pathways between it and the brain. 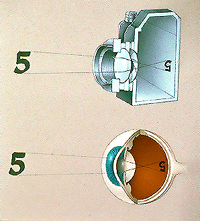 The eyeball is set in a protective cone-shaped cavity in the skull called the orbit. Fatty tissue inside the orbit surrounds the eye and cushions it against blows and other injuries. The soft tissue also enables the eye to turn easily in the orbit. Six muscles move the eyeball and help coordinate it with the other. Other important structures include the eyelids which protect and lubricate the eye; the conjunctiva or lining of the eye; the lacrimal gland which secretes tears and other protective substances; the lacrimal sac which drains away tears and other debris. The internal eye is filled a fluid type substance which nourishes and protects internal structures. The space between the cornea and lens is called the anterior chamber and is filled with a watery fluid called aqueous. The cavity between the lens and retina is called the vitreous cavity because it is filled with a jelly-like substance called vitreous.

The eye functions much like a camera system. The goal of a camera is to take light rays and focus them onto a surface so that an image can be formed. It uses a lens system for proper focusing and an apparatus for regulating the amount of light entering the camera. Improper focusing will cause a blurred image, and too much or too little light will cause an overexposed or underexposed image. In much of the same way, the eye has a focusing system, an apparatus that regulates the amount of light, and a surface upon which images are formed.

Here’s how it works: 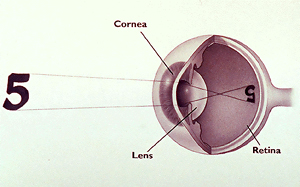 The focusing parts of the eye—the cornea and the lens—bend light rays toward one another. This is called refraction. The cornea provides most of the refracting power of the eye which does not change because the corneal curve remains constant. The refracting power of the lens, however, constantly changes as the eye shifts back and forth between nearby and distant objects much like the automatic focusing system in a camera. This process is called “accommodation,” and is achieved by the ciliary body (a large muscle inside the eye) causing a change in the shape of the lens in response to visual demand.

Together, the cornea and lens work to bend light rays together to form a focal point on the retina. The retina is an electrically sensitive membrane which picks up the light rays, and through as series of complex mechanisms, organizes and packages these impulses. They are then sent via the optic nerve to the brain which acts much like a computer, where the information is “decoded” into what we know as vision.

The center part of the retina is called the macula. This is the most sensitive part of the retina where central vision occurs. All other retinal tissue serves the peripheral part of one’s vision. Many people erroneously believe that the pupil is responsible for focusing. The pupil only regulates the amount of light entering the eye and also affects depth of focus much like a camera system. In bright light, the pupil is small and depth of focus is greater than with a widely dilated pupil seen in dim light where the depth of focus is shallow.